Detroit Students get a Hands-on Look at Skilled Trades

Detroit Students get a Hands-on Look at Skilled Trades 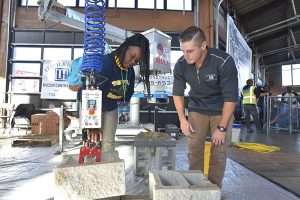 Detroit — Wearing safety glasses and ear muffles, Fantasia Jackson carefully held a nail gun and fired it into a large wood board during a demonstration Tuesday at the Sachse Construction Academy in Eastern Market.

As her fellow classmates from Northwestern High School took turns working with the nail gun some appeared more natural at it than others.

“You’ve got to push hard on it,” said Jackson, a 14-year-old sophomore.

More than 500 Detroit-area high school students gathered in Shed 3 in Eastern Market to participate in hands-on demonstrations with 35 skilled contractors Tuesday during the construction academy, which is in its fourth year. The contractors included construction trades involving masonry, tiling, and roofing.

For the first time this year, the event includes a skilled trades job fair for 18-to-25-year-olds.

The skilled trades industry faces a shortage of workers both nationally and locally as older workers retire. Events like the construction academy are designed to help spark interest in young people looking for a career, said Todd Sachse, CEO of Sachse Construction.

“Our industry needs skilled trades,” he said. “There’s just not enough. We can’t get our work done fast enough with enough skill as we need to be able to do. Selfishly, I want to encourage people. Selflessly, we believe that there’s a lot of opportunity for Detroit young men and women.

“College is not for everybody,” Sachse said. “Just because somebody doesn’t go to college doesn’t mean they can’t have a successful, vibrant, engaging career. The average electrician, the average plumber, the average carpenter makes more money than the average architect, so it is an incredible career and I think a lot of young men and women don’t realize that. Part of it is to expose them to that opportunity.”