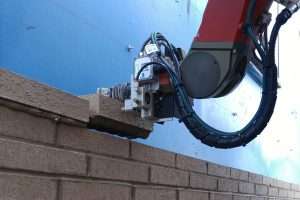 Several companies in and around Rochester are developing and using new construction technologies, and say the use of robotics, drones, and other modern equipment and software is shaping the future of the construction industry by increasing worker productivity and improving project outcomes. Robotics is being used in bricklaying and excavation, while companies are finding a variety of uses for drones and software used to model existing and potential job sites and structures.

Founded in 2007, Victor-based Construction Robotics made a name developing the semiautomated mason, or SAM, which is a bricklaying machine the company says can more than triple a mason’s productivity on a job site and reduce heavy lifting. A SAM prototype was first used alongside masons in 2013 on the local Progressive Machine & Design building, and since then the machine has been rebuilt and brought to market.

“Our company is focused on construction as a whole, but we decided to start with masonry because we wanted to find a repetitive task,” said Zak Podkaminer, the company’s director of strategic initiatives.

Developing SAM put the company on the map, Podkaminer said, and Construction Robotics has grown to employ more than 30 people — up from just seven in 2013 — and the company is continuing to grow and hiring workers at all levels.

Another system developed by the company to lift heavy materials like masonry blocks is now on the market. The material unit lift enhancer, or MULE, is described as a lift assist device and can be used to lift material weighing up to 135 pounds. Podkaminer said the company expects future machines to be able to lift up to 600 pounds.

“It’s designed for pretty much anything,” Podkaminer said of MULE’s capabilities, noting the company has developed several attachments to allow the robot to lift different materials. “It’s a smart lift assist device that allows you to pick something up and basically guide it to where it needs to go — and it makes it feel weightless to the user.”

SAM and MULE don’t replace humans — both machines need human assistance to work — but the robots do increase worker productivity and reduce the physical toll on masons, lowering the risk of injury, according to Podkaminer. Robots and other automation in the construction industry is unlikely to put workers out of a job, he said, but rather allow companies to continue current levels of work as fewer people pursue careers in the field.

Construction Robotics is continually searching for new, innovative solutions to revolutionize the construction industry with equipment for all trades, Podkaminer said. It’s unclear what the company’s next development might be, but there are several other areas of construction the company wants to tackle, Podkaminer said, pointing to roofing, drywall and plastering.

“There’s nothing that’s not on the table, and it really comes down to demand,” he said. “We get reached out to by companies on a daily basis that want us to solve their problems, and we’re always kicking around ideas of what to do and what to tackle next.”

In addition to increasing productivity, technological advances are improving quality and precision on construction sites. Rochester-based distributor Admar Construction Equipment and Supplies is equipping companies with technology to build and document construction in a more precise and data-driven way.

Admar Supply sales manager Rolf Witt said there’s a broad spectrum of technology being used, including highly precise scanners and lasers used in and around a building to take a combination of thousands of photos and measurements, providing a “hugely dense set of data” with measurements in every direction.

Automation on bulldozers is one of Admar’s most popular products, Witt said. Computers and GPS sensors are installed on bulldozers to allow precise grading of job sites, with the blade of the bulldozer moving up and down and tilting automatically based on what a computer is telling it.

“It’s called machine automation, and it’s a type of robotics,” he said. “It’s just like any other type of robot that has sensors that tell it where it is and then it has a data set in the form of a computer and a (computer-aided design) file that tells it where it should be every moment.”

Peter Muench, vice president of preconstruction at LeChase Construction LLC, said drones, or unmanned aircraft, are being used to communicate with earth-moving equipment for site work. Drones are flown above the site and map out the landscape below, relaying that information to machinery on the ground.

Drones can be used to scan existing earth conditions and get quick calculations of earth stockpiles, Muench said, noting the technology is now being used on more than 60 percent of jobs.

“We can actually go through and scan the entire site with a drone, and it’ll tell us in about an hour or two how much material we have to move out of there or bring in,” Muench said, noting it provides highly accurate information in less time and with less manpower.

Information can be relayed back to the company’s offices as well, Muench said, allowing estimators to develop more accurate pricing for future jobs. He said the technology “really drives efficiency out on the site,” and can make a company more competitive bidding future work.

Drones are also being used to inspect multi-story structures, which Muench said provides a safer alternative to having workers examine the outside of the upper stories of a building. Witt said drones inspect roofs and provide price estimates for roofing projects. In the past, an individual would have to drive to a job site and climb up to the roof to take photos of the existing roof and various measurements.

“Now that same guy just goes over, sets up in the parking lot and a drone automatically goes up and flies over the whole roof of the building,” Witt said. “And that takes place over the course of probably 30 minutes… it’s really an amazing technology.”

LeChase is also using drones to communicate with clients, providing the company with an easy, cost-effective way to make time-lapse videos of construction and allowing clients to understand the day-to-day operations on a job site from their offices.

“It’s very helpful for weekly updates for owners and getting good footage of an entire site from good vantage points that you can’t get from a regular photographer,” said Jennifer Miglioratti, director of corporate communications.

Building information modeling, or BIM, is another technology that’s heavily used in construction to provide models of future and existing buildings. It pinpoints the location of pipes and electrical, heating, and cooling systems in a structure.

Though not prevalent yet, some companies are taking BIM a step further and tying it in with augmented reality, or AR, Miglioratti said. LeChase is currently exploring AR, she said, calling it “the next step where you’re wearing that technology and can actually look around as if you’re inside of (a building).”

Muench said there are a lot of technologies that come and go. For that reason, LeChase — a company that has been around for nearly 75 years — is cautious about bringing something new to the market that may not prove itself in the future.